The Fighter – Review by Jeremy Bish 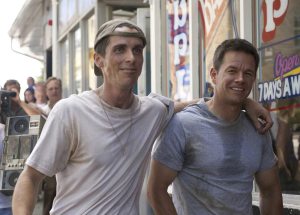 The Fighter, is it as good as rocky? That is not the question. This movie demands to be judged as a unique entity. This is a true life family drama that happens to have boxing in it.

Beginning development way back in 2005 the fighter has picked itself up of the canvass and then been dropped back on its arse more times than Ricky Hatton. After a succession of director and script changes, it seemed Wahlberg, who had been assigned to the project since day dot, would not fulfil his dream of creating a boxing drama with believable fight scenes.

Martin Scorsese and Darren Aronofsky both at separate stages were assigned to the project but eventually turned their back on the project. Scorsese decided to part ways with the project due to not wanting to make another boxing movie (Raging Bull). Aronofsky although impressed by the script and Wahlberg, decided after The Wrestler he did not fancy another film about a dejected sports star.

Just when it seemed destined to languish in Hollywood purgatory, Bale and Wahlberg asked David O. Russell (Three kings and I heart Huckabees) to helm the movie, and in 2009 filming finally began. 2 years later and here we are.

The film revolves around a working class family in the less than glamorous town of Lowell, Massachusetts. The film opens with a monologue from Dicky Eklund, played by Christian Bale, within seconds of staring into Bales disconcerting glazed stare, you are gripped.

Bale who plays a has been boxer, who claims to be the “pride of Lowell”, protests he is being filmed by HBO to document his comeback, when in reality they are filming a documentary about crack addiction. The film quickly switches attention to Whalberg who plays Micky Ward, Dicky’s half brother, who has a fight coming up and Dicky is training him.

It quickly becomes apparent that Ward’s huge family have complete control of his life and the direction of his career, especially his mother and half brother Dicky. This is where the film starts to pick up pace, can Ward take back the reins of his life, and fulfil the unquestionable talent he possess?

Wahlberg, whose commitment to the project really shines through in what is without doubt his finest performance to date. The Massachusetts actor had a gym and boxing ring built in his house, and trained for months with Micky Ward himself in an effort to make his boxing style identical. On screen Wahlberg plays a downtrodden boxer, but more importantly the overlooked member of the family, to perfection. His performance is subtle, and although he knew the scenes he shared with Bale would be remembered for another tour de force show of method acting by Bale, he was humble enough to take that onboard and let the film go in the direction it had to.

He is the glue that holds this film together. Just like the real life Ward, Wahlberg’s grounded mentality and lack of desire for the limelight makes this film completely believable. You believe in the dynamics and chemistry of the dysfunctional family, which in turn enable you to sympathise with all the characters.

Bales performance is simply Oscar worthy, once again committing to the role with unprecedented standards (living with the real life Dicky Eklund for 3 months). Bale is making a habit of raising the bar for his peers, and this is nothing different. It’s quite hard to believe this scrawny, squirming, crack addict, is Batman. Thus proving his versatility.

Amy Adams plays Ward’s ballsy girlfriend, her tenaciousness is a pleasure to behold. Just as is the rest of the supporting cast, the mother, step dad, and the gaggle of sisters, all play their part in creating a modern day masterpiece.

Aside from being a fantastic film about a gruelling and unforgiving sport with some truly breathtaking fight sequences, this film manages to highlight the difficulties of having to handle the impossible balancing act… trying to support your family’s values, whilst doing what’s right for yourself.

There’s a lot to take away from this beautifully Hollywood biopic. For me on a personal level, Micky Ward shows what can be achieved with hard work, always believing in yourself, and never turning your back on your families best interests.

The Fighter starts its run on Fri 18 Feb, click here to book your tickets.

This entry was posted in Citizens eye on Film, Film, Uncategorized. Bookmark the permalink.