Posted on February 9, 2012 by Phoenix Square 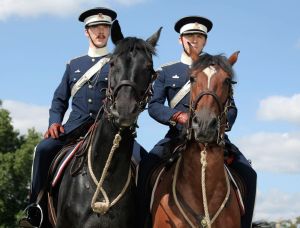 There are not many directors with a back catalogue like Steven Spielberg. Regardless of what you may think of his films, he clearly has a great passion for story telling, in many forms, and regardless of what genre he may be working in, this shines through. It’s no surprise then, that his new film, War Horse not only credits the 1982 book as an inspiration, but also the recent stage adaptation.

Set during The Great War, the story revolves around a horse named Joey, and owner/trainer/friend, Albert Narracott. Their friendship is put to the ultimate test however, when the outbreak of war forces their separation. Both characters are led down different paths, into dangerous situations and meet many people along the way, all effected by the power and horror of war.

In many ways, the film still feels like a play. The locations are very contained, the staging is very reminiscent of the theatre (especially a scene taking place in no mans land.) This is no bad thing, and it helps to serve the episodic nature of the story. One thing that really impressed me was how even handed the film is when it comes to the everyday people that get thrown into war, on both sides of the battle. There is no good vs. bad mentality to its depiction of war, it more takes the stance that in war there are no winners. This is a common theme in Spielberg’s previous work, and he handles these elements like the expert he is. This war is hard to watch, and even though it avoids any scenes of gore, it gives you the smallest glimpse of what it must have been like, and every soldier is handled with the respect they deserve.

An area that will go largely unnoticed by the audience is the visual effects in this film. It is rare to see a film so visually consistent, especially one full of effects sequences that nobody will ever notice. The attention to detail is in all of the right places, and has produced a heavily layered and authentic world that doesn’t get in the way. The film takes you on an incredible journey, but lets you focus on the story and emotion, the way the best Spielberg films do.

Like all the best Spielberg films, John Williams provides yet another incredible score, that I actually think is the real reason behind all of the tears on peoples faces as they leave the screen.  It’s hard not to get emotional when you have some of the best people in the business giving their all to make it happen. But then that’s sort of the point of cinema; to make you feel.

Andrew Leeke works Front of House at Phoenix Square, where he is also a Production Assistant and provides animation workshops for kids. He is also a freelance animator and visual effects artist. Despite being 27, he still spends all of his pocket money on toys.