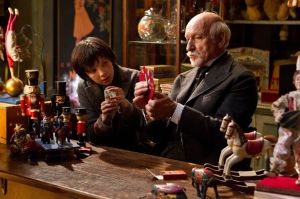 In another year saturated with average family oriented 3D releases, you’d be forgiven for assuming this is just yet another by the numbers kids movie. However, those who take a closer look at its advertising campaign may have noticed something rather special; a name far more interesting than that of the film itself. That name is Martin Scorsese. Family films aren’t his usual stomping ground (though this isn’t his first time) but after seeing Hugo, I hope he continues to move in new directions.

Set in Paris in the 1930’s, Hugo Cabret is a young boy who lives between the hussle and bussle of Montparnasse station. He watches the lives of others from hidden places, staying invisible, doing his work and avoiding the station inspector. Inevitably, he cannot stay hidden forever, and his life eventually becomes entwined with an old man who runs a toy stall in the station, with the help of his niece.

And that is where I am going to stop telling the story, because the magic of this tale is in the reveal of it. Hugo makes a discovery that leads him down a path that not only affects him, but will actually change the way many people view film itself. This isn’t actually a kid’s adventure film; this is a love letter to all of cinema. At times, it plays out like a silent era film (using distance as the device to mute its characters) next its beautifully coloured, exaggerated Paris is unfolding before you like a complex three dimensional decoupage. Every single second of this film is utterly gorgeous, and again, this is integral to the story. A central theme of the film is the notion that every part of a machine has its function, and every person has their function too. This is true of the film itself, even the choice to shoot in 3D is a conscious decision to add something to the story, not simply just a tacked on gimmick. After all, 3D films are almost as old as cinema itself.

The process of creating films and animation, and the history of the medium that would become a multi-billion dollar industry unveils itself before your eyes, like a friend telling you their most personal and private secrets. I was surprised just how faithful it is to real events, letting the magic continue beyond your trip to the cinema, knowing you can research and discover even more of this story once the credits roll.It’s so hard to describe how much I loved this film without spoiling it. So many perfect moments come together to make a TRUE family film. Often this term is a way of describing a children’s film that has a few jokes for the parents. Scorsese hasn’t created something that will enchant adults just as much as it will children, as this is as close to real magic as you are ever likely to see.

Andrew Leeke works Front of House at Phoenix Square, where he is also a Production Assistant and provides animation workshops for kids. He is also a freelance animator and visual effects artist. Despite being 27, he still spends all of his pocket money on toys.