In a Better World – Review by Ed Stilliard

Posted on September 5, 2011 by Phoenix Square 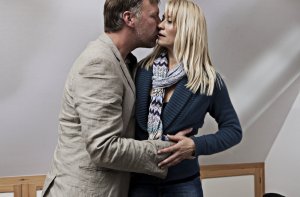 In A Better World strikes a poignant chord with the current national psyche where recent events have made people point a finger at home rather than abroad.
Medical aid worker Anton (Mikael Persbrandt) returns home from war-torn Sudan to his estranged wife Marianne (Trine Dyrholm) and two boys, of which the eldest, Elias (Markus Rygaard), is being bullied at school.
A new school year brings a new friend to Elias, Christian (William Johnk Juels Nielsen) who has his own baggage – a mother who has died of cancer and a father with not enough time for his son.
While the two worlds we see in the film – Sudan and Denmark – could not be further apart in terms of topography and demographics, they are united in a world of violence.
Unsurprisingly while the plot pivots around the violence in sedate Denmark, it is the grim scenes in Sudan which are the most arresting.
Questions are raised as to whether Anton, who has to deal with horrific wounds day-to-day, has the right attitude to bullies, which is firmly passive aggressive.
Meanwhile Christian, who is struggling to adapt to a world without his mother, finds that the best answer to the bullies is to confront them.
At one point the boy says: “This guy bullies everyone, but nobody stands up to him.” It is something that many people in this country have been wondering for some time.
And again Christian poses the difficult-to-respond argument “I don’t think he understood that he lost” after Anton confronts the same bully at the garage he works in a bid to prove to the kids that he’s not a wimp, but doesn’t throw a punch.
His strong arguments and determination also influence the lonely Elias, who has to deal with his absent father.
But without a permanent father figure, Christian takes his attitude several steps too far and he very soon becomes problem child.
A complex film, Susanne Bier makes every scene count, aside from a few brief moments where there is a lot of soul searching and gazing beyond the camera by the adult characters.
It’s the scenes in Africa which drive the film forward along with Persbrandt’s, Dyrholm’s and Nielsen’s performances.
In one memorable scene, immorality gives way to a sense of justice when Mikael, who takes Christian’s mentality with him back to Sudan.
It is a pitch-perfect performance by Persbrandt, who makes the film come alive and doesn’t overshadow the other actors who also their chance to shine.

Anyone seeking answers to the recent riots will find some, but just as many thought-provoking questions, in this mesmerising film.

This entry was posted in Film, Uncategorized. Bookmark the permalink.