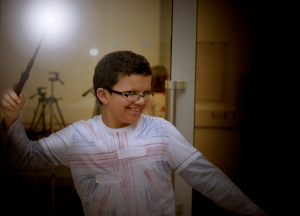 On Saturday 11th December for 3 short hours the ETC suite at Phoenix Square became a place of cinematographic magic as 16 young people engaged in the Wizarding Film Workshop.

The next section was the most popular as young people has the opportunity to put their new skills into action. They devised, acted out and filmed some scenes featuring their favourite characters from the Harry Potter films.

It was a great afternoon in an enjoyable atmosphere and the young people involved clearly enjoyed themselves. Although 3 hours may seem like a long time, in filming terms it is a very short time. Large Scale hopes to build on this taster day and deliver more substantial workshops in the future.

In a short consultation exercise we conducted at the end, overwhelmingly young people suggested they would like to be involved with a much longer workshop – a week being the most popular choice. Whilst there was a smattering of choices for an animation day and some editing skills, most would like to make a film. We will see what we can work out!

Some comments from the young people who attended the Wizarding Film Workshop.

The Wizarding Workshop was a taster for bigger things. With Phoenix Square and Large Scale offering a range of courses for the spring half term (18th – 23rd February 2011), for primary & secondary age young people and a one day workshop for adults.

This entry was posted in Education and Workshops, Uncategorized. Bookmark the permalink.